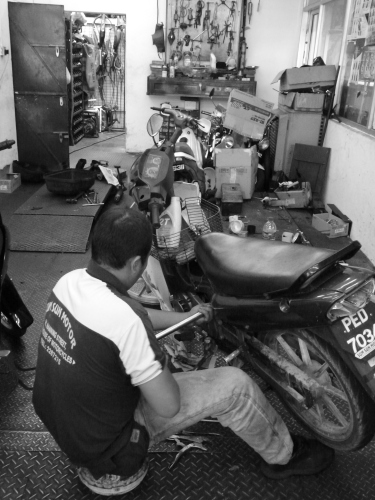 Most motor mechanics like Ah Lung left school at a very young age to take up apprenticeship in blue collar trades. Like the rest, they leave their hometown and survive on mearger earnings living in shared apartments, only going home once or twice in a month or during festive seasons. Most of them never if ever left their trade but some lucky ones became bosses of their own repair shop.

Over the years, as Ah Lung became a more formidable repairman, he was also given the task to head younger apprentices that was allowed into the stable. Currently, there are no guidelines compelling skilled work force to attain competency certificates thus, this cycle of how skills were handed down naturally repeats itself. Picture taken at Jln Nanning, Penang.