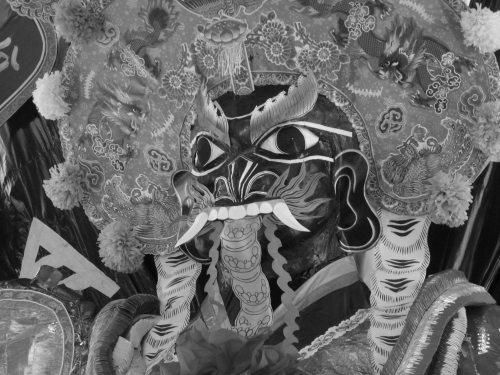 The ‘Hungry Ghost Festival’ happens annually during the seventh month of the Chinese calendar. During this period, traders and residents from the same street or community would collectively raise funds to organize a feast complete with entertainment in the form of traditional puppet or opera shows or the modern version called ‘Ko Tai’ which is a stage performance to appease ‘Tai Su Yeah’ (God of Hades picture above) who is supposedly the deity that protects mortals and these wandering spirits whom were all released from the underworld to roam for one full month.

There is a marked difference between ancestor worshiping that happens during ‘Cheng Beng’ (All Souls Day) as compared to the Hungry Ghost Festival which is a ritual to appease all ghosts be they young or old but specially to those spirits whom were denied a proper ritual send-off when they die or those whose next of kin and ancestors forgot to pay homage to them in the hope that these lost souls some of whom are out seeking revenge will not disturb them, therefore the term ‘Hungry Ghosts’. Because of this, younger children and adults are taught to observe the strictest of curfews to avoid encountering these roaming spirits.  The food on the altar are for the spirits with ‘Tai Su Yeah’ relishing the offerings first before them, the first few ‘premium’ rows in front of the Ko Tai are reserved for these spirits, and the paper effigies and money are for the spirits.  Superstitious as it is, the Seventh month is also a taboo period for those wanting to tie the knot, move house or kick-start a career as bad luck is said to befall. Exactly midnight on the last day of the festival, the ghosts would return back to their own world as the Gates of Hell closes. The effigy of Tai Su Yeah is then light up in a bonfire alongside the rest of the paper effigies. The leftover food after being consumed by the spirits, would be distributed to the needy. Picture taken at Concordia Road, Pulau Tikus, Penang.